Sunshine On My Shoulders has just gone live on Amazon. There are still some publishing steps to take for other mediums, but as of today the book is available in print and e-book versions. Obviously I’m excited, but there’s also the trepidation and nervousness about tossing your creative child out to the world. And of course, the strong desire to hang on to it for just one more read through to catch that final typo that you always miss. It’s hard to pull off the editing hat and say it’s time to go.

But for now, book four has escaped from the fingers still clutching the red pen.

During this process it became clear to me that the covers needed to more fully reflect what the series was about. To that end I’m in the process of updating all the book covers to show the connection to Wallace, Idaho’s past. That also means I’m changing the name of the series. Initially I called the books the Mountain Mystery series. I thought I would write stories set in other locales, but in the mountains, and that characters from different books would wander through each other’s stories.

But one thing I’ve discovered with these books is that when I mention ‘Wallace, Idaho’ people immediately connect. So because that’s the place where readers react to the book, I’m changing the series name to ‘A Wallace, Idaho Mystery’. I understand this is a bit of a risk but I think in the long run the change will be a better fit for the series.

Sunshine On My Shoulders will be the first book with that series change. But when the new covers are updated shortly, you’ll see that reflected on all the books. In the meantime, it’s the same series and the same characters. I hope you’ll enjoy reading this latest installment. 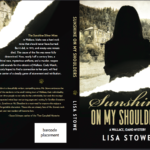 Sunshine On My Shoulders Print Cover